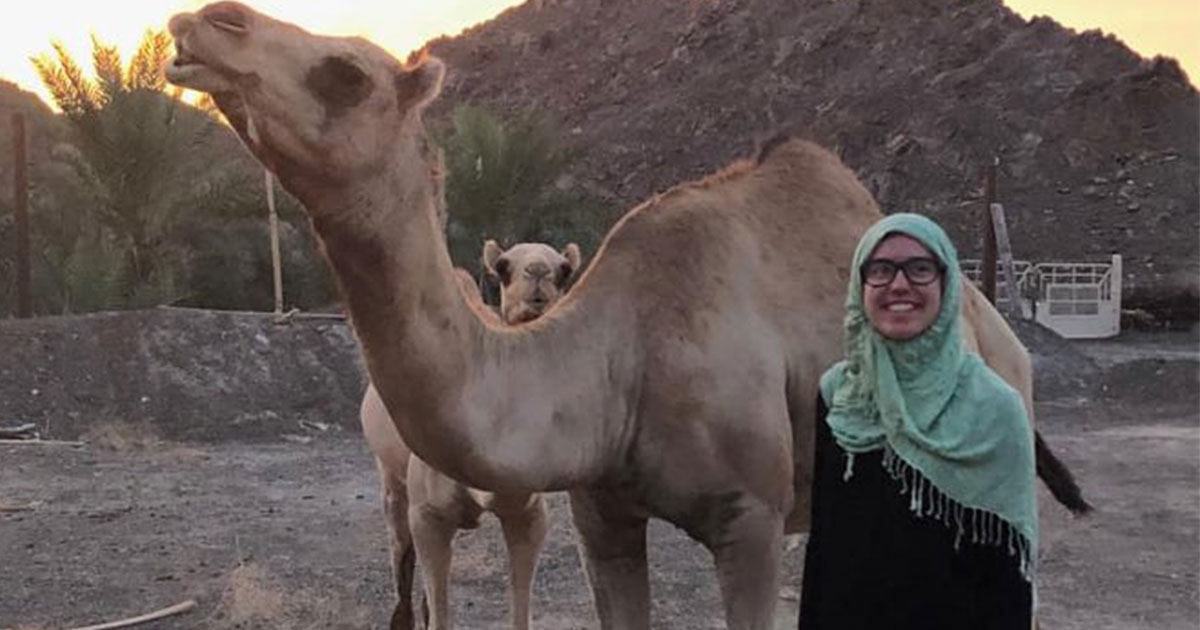 Carmen Friesen is going into her third year of study in the BA Christian Studies program with a focus in Missions. She tells us a bit about her experience in her summer practicum placement in the Middle East and what she’s learning.

Folks, here are some stats for you: unreached people groups make up 42% of the world’s population. That’s 3.19 billion individuals who have never heard the gospel because they have no one to hear it from (Joshua Project). Most of these people will live and die without ever hearing the life-giving message of what Jesus has done for them. For those of us who have grown up in gospel-saturated southern Manitoba, these statistics can be difficult to grasp.

As an SBC student in the Missions program going into my third year, I have heard these numbers before. But this summer, those numbers were transformed into faces, names, stories, and friends. Needing a practicum for my degree and also itching to get a taste of cross-cultural missions, I travelled to a small Muslim country on the Arabian Peninsula* and got to experience life among the unreached for six weeks. I went with the Missions agency Pioneers, participating in their short-term summer program called The Edge.

Along with two other teammates, I joined a team of missionaries who live and serve in this country, working as English teachers and building relationships with the locals. The three of us participated in their summer teaching program, running English classes for kids and teens who want to improve their English skills during the summer. Besides teaching, grading, and lesson-planning, we also did some sight-seeing and visited many of the locals in their homes. This culture is extremely hospitable, and though the language barrier was an obstacle, we were humbled by the generosity and graciousness with which people welcomed us into their homes. By the end, I felt that six weeks was too short and we were only just beginning to build meaningful relationships!

After studying cross-cultural missions for two years, I was excited for the chance to put into practice what I’d learned. Books and research papers were very helpful in preparing me for ministry in a Muslim culture, but there are some things you can only learn by going out and doing it. One of the many things God taught me about is the importance of prayer. Throughout this experience, I gained a new perspective on how missions is not something we do ourselves. Rather, it’s a chance for us to partner with what God is doing. He is writing a grand love story among the nations, and He invites each one of us to be part of it!

This summer, I felt that the most important thing we did was pray. The people of this country are friendly and polite, but most have little interest in hearing the gospel. There is a deep-rooted resistance to Christianity that only the Holy Spirit can change. The message we share will only be received if God goes before us, softening the hard ground and turning it into fertile soil. I was challenged to pray persistently and faithfully, trusting that God is at work even if there is little outward evidence of change. I’m excited for the day when Jesus raises up a thriving church among this people group!

I’ve learned a lot from the professors at SBC, and I’m grateful that this practicum has given me the chance to turn theoretical knowledge into practical. As I return to SBC for one more year of seeking God and growing in my faith, I look forward to being further equipped for whatever part God has for me in His great story. Hopefully, the training I receive here will prepare me to return to the Middle East someday. Despite the difficulties of living in this region, God is doing something amazing and I want to be there to witness it!

Carmen is going into her third year BA Christian Studies (Missions) in Fall 2019.